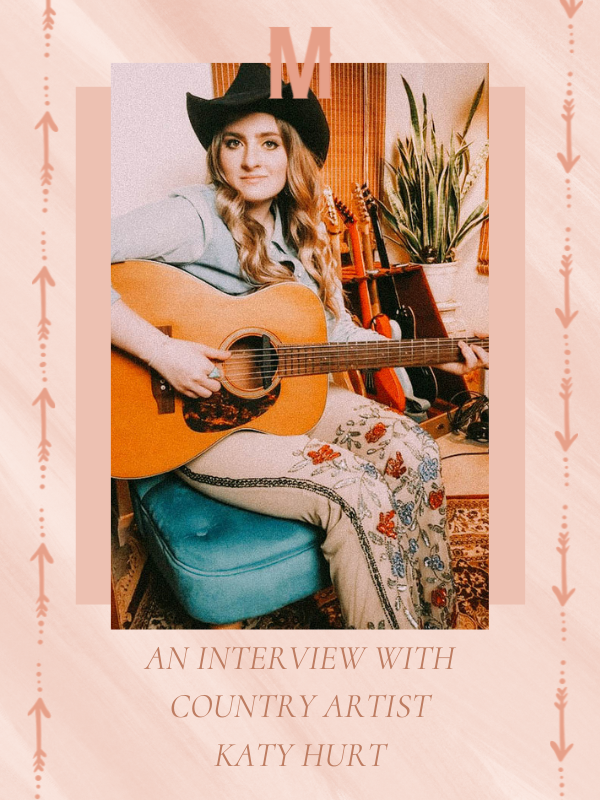 Katy discusses with us what it was like being the supporting act for Liam Gallagher, what inspired the song 'Unfinished Business' and how she managed to wreck her dad's jeep whilst shooting the music video for 'Revved Up'!

Melbelle is a fashion store with a western and bohemian influence, and we’ve formed some special connections with a handful of country singers, our Melbelle Country Artists to help promote country music in the UK – and, of course, to sell a few boots, hats and dresses along the way!

NOW, I AND THOSE WATCHING WOULD LOVE TO KNOW MORE ABOUT BOTH YOU AND YOUR MUSIC; WOULD YOU BE HAPPY TO ANSWER A FEW QUESTIONS FOR US?

NOT MANY COUNTRY ARTISTS CAN SAY THAT THEY HAVE HAD THE PLEASURE OF BEING THE SUPPORTING ARTIST FOR LIAM GALLAGHER. HOW DID THAT COME ABOUT AND WHAT WAS THAT LIKE!?

Honestly, it was such a whirlwind! I was booking shows for a tour that we were doing, it was 2018 and I found a venue called The Pilton Working Men’s Club.  I thought I had booked for us to play an evening at the Pilton Working Men’s Club. What I hadn’t realised is that the evening I’d booked us to play on was a Battle Of The Bands Competition and when we showed up, there were seven other bands in the carpark and we were like ‘Oh’!

It was a competition to play the Pilton Party, which is a party that happens in the year that Glastonbury is fallow, for all the locals of the town of Pilton. So we played and didn’t really think anything of it and we were extremely lucky in that we were hand-picked by Michael Eavis and the judges that evening to be one of the support acts for the Pilton Party in 2018.

It was just so crazy; I had never won anything in my entire life and haven’t won anything since and obviously it was just meant to be, we showed up, we played, he liked us and so we got to play. I didn’t know who the headliner was! I didn’t know who we were going to be supporting, we were just told that we would play at the Pilton Party.  It wasn’t until the tickets went on sale that they – they didn’t even tell me – they just sent me the poster to share and it just had Liam Gallagher on it! And I was like, ‘okay, that’s going to be crazy!’. And then because he’s obviously a huge artist the tickets sold out immediately.

It was just such a wonderful experience; it’s the best show I’ve ever played in my life, it was 8000 people. It was just so overwhelming and wonderful. 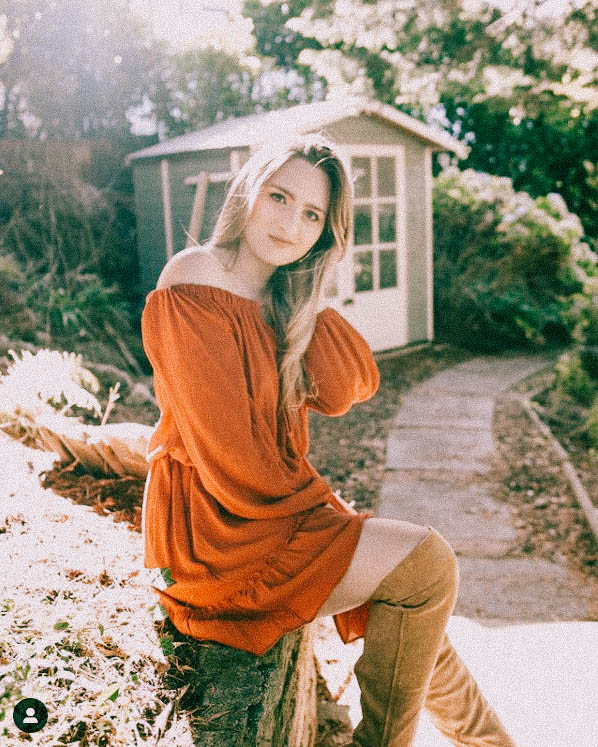 I READ THAT YOU MANAGED TO TRASH A JEEP WHILST YOU WERE FILMING THE VIDEO FOR REVVED UP FOR THE UNFINISHED BUSINESS ALBUM! WHAT HAPPENED THERE?

I feel like this story has gotten a little bit out of control – it wasn’t intentional, I didn’t just decide to trash a jeep! For Revved Up we decided that we wanted to film our own mini-western and it turned out that most of the original western movies were actually filmed in Spain because it is was cheaper than filming in Texas and in the US. So, the band and I decided that we would drive down to the desert where they filmed ‘The Good, The Bad And The Ugly’ and we would just film our own.

Steve, my drummer, has a Jeep Wrangler, so we were like ‘ok, we’ll take the jeep and that’ll be the one that we use in the video; it will be the get-away car’. So that’s the green one if you watch the music video, that’s his.  And that’s his actual car, he still uses that every day.  And then my dad at the time had a Jeep Grand Cherokee and I was like ‘we’ll we need two vehicles’, because there were seven of us that went; we went with Ryan Say who is our Director, Dillon Osborne who was our AD and Leah Hogg, one of my friends who came to help us out and then the whole band. So we had to fit seven people, camera equipment, clothes, guitars, the whole drum kit and I was like “Dad, can I borrow the Jeep? Can I just take the Jeep to Spain?”. After much negotiation he agreed to let us.

But it turns out that although Jeeps are amazing, Wranglers are designed for off-roading and Grand Cherokees are not…! We learnt that pretty quickly when we were in the desert, that the second Jeep did not want to deal with off-roading and driving through the desert – and it’s bumpier than you think; it looks flat but it’s not! On the way home, the rear axle broke, the braking system stopped working so the car was braking FOR us on the motorway(! ), every single warning light came on, there was a small dent in the side where I may or may not have reversed it into a wall! It just started to fall apart and so by the time that we got home, we actually needed a police escort to get back to the house because the car was braking so frequently we couldn’t safely drive home. So I showed up at 3am in the morning, we got back from the ferry and I had to call my dad and be like “the police are here, they’re going to help us get home but please don’t hate me!”.

So that’s how we trashed a Jeep; it was not intentional but it’s quite funny, every time that I sell CD’s at shows now I have to tell people that the proceeds will be going to replace my dad’s Jeep.

I WAS GOING TO ASK IF YOUR DAD HAD FORGIVEN YOU YET…?

I think he’s forgiven me; I think he’s still waiting for me to buy him a new one. So anybody listening, please feel free to stream my music on Spotify so I can one day pay my dad back!

We got an awesome music video out of it, so I think he was pretty impressed either way that his car has a lasting memory in this video. 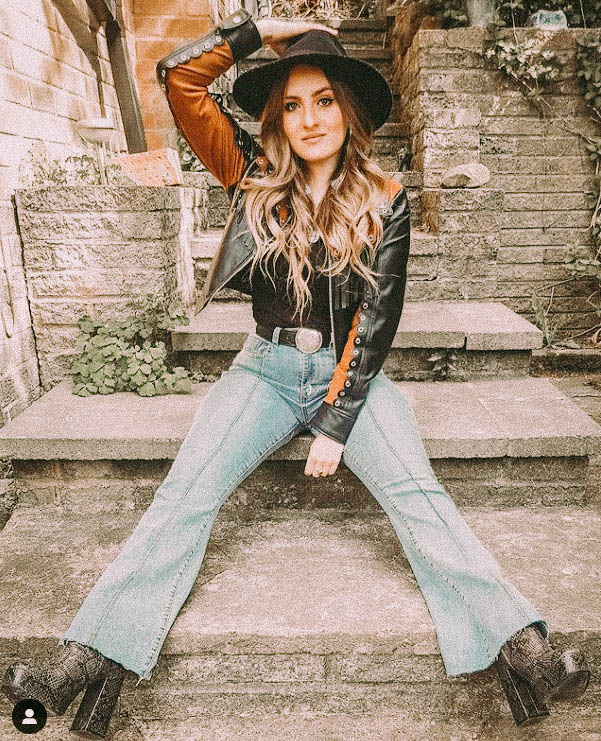 Yes, my new-found love of Canada. When I was trying to figure out where to record my last EP, the Unfinished Business record, with Gab we wrote a list of our favourite producers and we just thought let’s reach out to them and see if anybody responds. They’re probably not going to reply, but we thought we’d try and see if Mutt Lange who did Shania’s records and Def Leppard, you know, he’s probably never going to respond. I messaged a bunch of people in Nashville and one of the albums that was on that list was The Bros. Landreth ‘Let It Lie’ record, which for anybody who hasn’t heard it I 1000% recommend that you go and listen to that album. The producer who did that record is called Murray Pulvar and he emailed us back! He said “Oh my gosh, I love your songs, I’d love to talk with you, let’s Skype and see”, so we Skyped him and by the end of the Skype call I had already booked the plane tickets; I was like, “I HAVE to work with you, this is amazing; you know I exist!”

So we flew out to Winnipeg in January and it is -30 degrees and we just had the most magical experience. Making that EP was just the first time making music that I felt truly understood and felt truly in my element and I was in the studio, crafting these songs with a group of people that I absolutely adored. It jut went so well and that’s why I’m so proud of that EP and so I wanted to go back to do my album, which I did last January and that’s what I’m working on at the moment with those guys. So they introduced me to Winnipeg and I’ve now been back three times and I’m just obsessed with it, I love it.

The other thing is that ever since I was a kid – and this is just like a childhood story – but my first teddy bear when I was a kid was a polar bear and I have always been obsessed with polar bears.  In fact, one of my incredible fans bought me an ‘adopt a polar bear’ for my birthday a couple of years ago, so I actually had a polar bear and I got letters from WWF. So when we were out in Winnipeg, Murray took us to see some polar bears. So I got to actually see them in person for the first time in Canada and it was just marvellous; I cried the whole time that I was there! But it just made it even more special because I was like, not only am I making the music I love, but I’m actually seeing my favourite animal, seeing a polar bear, like, there which was just awesome!